Our client wished to support the market access of a pre-operative antiseptic by conveying its economic and clinical benefits to a varied audience, which included payers as well as surgeons and epidemiologists – these external stakeholders were not necessarily familiar with economic models and therefore clear communication of the product value was imperative.

To achieve this, they required an interactive model which could simply and intuitively demonstrate cost savings and reductions in surgical site infections for a specific region (such as an individual hospital).

The model was fully interactive and allowed users to tailor settings to stakeholders’ specific circumstances at a regional or local level, or within hospital departments.

The results of the model also allowed exploration of a number of different scenarios, including different comparators and approaches to pre-operative screening.

The budget impact model clearly demonstrated that using the antiseptic as part of a pre‑operative protocol would prevent a large number of surgical site infections, which would also result in a considerable cost saving by preventing the need for expensive treatments for MRSA and MSSA.

To adjust for differing levels of clinical and financial knowledge among stakeholders, the model also included a number of options to simplify the value communication, thereby ensuring that simple but impactful value messages were communicated through the model.

Value to the client

The model constituted a valuable part of the client’s market access strategy in ensuring the uptake of the antiseptic product, and was used in the field to communicate the value of the product to payers.

Furthermore, a publication of the results of the model was produced with the client to ascertain further awareness of the product value. 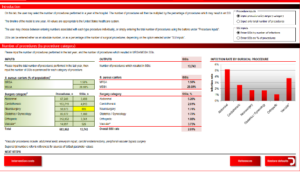 We’d like to set analytic software i.e. Google Analytics/Click Dimensions to help us improve our website by collecting and reporting information on how you use it. The cookies collect information in a way that does not directly identify anyone. For more information on how these cookies work, please see our Cookies Policy.